When last we left Dial H, Miéville was busy adding weird fiction and horror tropes to a little known corner of the DC Universe.  The events of the last volume have raised the stakes and opened the door to a multiverse of possibilities.  Unfortunately, while Dial H was an incredible critical success, its sales numbers left something to be desired and DC ended the run at issue 16.  True to form, Miéville seems to treat the cancelation as a challenge and crashes through two storylines to bring readers a climax worthy of this creative adventure, and a thoughtful coda that hints that we might not have seen the last of the Dialers.

Issue #7 picks up a few weeks after Nelson’s fight with the villain Ex Nihlio and her pet Abyss.  In light of the new threat of the Shadow on the Line, Nelson and his new partner Roxie, set off to uncover more secrets of the dials.  But their leisurely globetrotting quickly turns scary as they catch the eye of a Canadian super-agent who knows more about what they are than they do.

END_OF_DOCUMENT_TOKEN_TO_BE_REPLACED

Two things struck me as I was preparing for this review:  First, I somehow managed to skip Imager’s Battalion during my utter failure of a Cannonball Read 5.  I read the book, but I never got a review up.  Second, I think I ran out of useful things to say about the series back at book five.  The things that I liked are still good, and the elements that are weaker don’t seem to be improving.  If anything, the series’ increasing focus on military action reduces the immediacy of Quaeryt’s story and undermines the relationship readers have been building over the course of the last three books.  While the increased presence of Quaeryt’s wife, Vaelora, is a welcome and well executed addition, more and more Quaeryt feels like a background character in his own story.

To fill in some blanks, Imager’s Battalion took Quaeryt from the world of politics into the military, placing him in command of the first squad of Imagers ever used in true military service.  Charged with the invasion of the hostile nation of Bovaria, Quaeryt and the army he accompanies face down an escalating series of challenges while balancing the need to subjugate with the desire to be fair to the citizens they encounter.  Antiagon Fire follows much in the same vein, as a newly promoted Quaeryt is sent as an envoy to the people of Khel in an attempt to prevent further war.  Along the way, he is attacked by forces from the 3rd remaining nation, Antiago, prompting another conflict.

END_OF_DOCUMENT_TOKEN_TO_BE_REPLACED

‘China Miéville’ and ‘children’s book’ are not, at first glance, two things that would appear to mesh.  Miéville, who I have described in previous reviews as being macabre, dense and sometimes overwhelmingly complicated (in an enjoyable way), is hardly the first person I’d pick to write a book for older kids and young adults.  Nevertheless, Un Lun Dun is a triumphant piece of fiction.  It taps into the fundamental truths of adventure stories, uses them where appropriate and turns them on their head when necessary.  Miéville’s singular ability to deconstruct genre and trope help create an earnest adventure for those of us who were never singled out for greatness.

Un Lun Dun follows two London girls, Zanna and Deeba who stumble onto a pathway into UnLondon, an abcity behind and beyond London proper.  Suddenly dropped into a world of magic, animate garbage, carnivorous giraffes and a never ending parade of strange sights, the girls are desperate to find their way back home.  But Zanna is the subject of an ancient prophesy.  Called ‘The Shwazzy,’ she is destined to save UnLondon from the malicious cloud of toxins known as the Smog.

END_OF_DOCUMENT_TOKEN_TO_BE_REPLACED

Target: Catherynne M. Valente’s The Girl Who Fell Beneath Fairyland and Led the Revels There

Catherynne M. Valente is a sleeper nod for the title of my favorite author.  She combines the vocabulary of China Meiville with the storytelling sensibilities of Neil Gaiman and Philip Pulman’s eye for children’s adventure.  And in my previous review of her Fairyland series, I compared her favorably to L. Frank Baum, C. S. Lewis and Lewis Carol.  But what I think most impresses me about her work is the credit she gives her young readers. The Girl Who Fell Beneath Fairyland is a much darker work than its prequel and deals with the consequences of actions and taking responsibility.  Somehow, Valente is able to approach these topics with seriousness in an absurd world, and more impressively, never comes off as preachy.

The Girl Who Fell Beneath Fairyland and Led the Revels There picks up a year after September’s departure from Fairyland in The Girl Who Circumnavigated Fairyland.  We gloss quickly over some of the mundane events of her life in Nebraska during World War II before flying off to Fairyland again.  This time the trip is colored more by the events of the real world.  Magic is being rationed and the wonder of the place is starting to evaporate.  September discovers that she is indirectly responsible for the problems, as it is her own shadow who is siphoning off both the shadows and magic of Fairyland to fuel the glorious revels of Fairyland Below.  Feeling responsible for this turn of events, September sets off to put things to rights, even though she doesn’t really know how.

END_OF_DOCUMENT_TOKEN_TO_BE_REPLACED

Target: Helene Wecker’s The Golem and the Jinni

There’s something timelessly optimistic about ‘coming to america’ stories.  Even if we intellectually know that immigrants faced abject poverty, incredible discrimination and the lingering shadows of racial tensions held over from wherever they immigrated from, that sense of hope and of starting a new, better life pervades even the most depressing immigration story.  Helene Wecker captures this sense and deftly weaves it into a story of magic and creatures not quite human.

The Golem and the Jinni is really a story about culture shock, told from the perspective of two supernatural creatures who couldn’t possibly be any further from the concept of human culture.  Chava, a new golem without a master, has no experiences to draw on other than her instinct to help people and her tireless strength.  Ahmad, an enslaved Jinni, was sealed in a bottle for hundreds of years, trapped in human form and brought to New York without his knowledge.  For him, America is more a prison than a second chance and he must learn to work for a living and be a part of his community.

END_OF_DOCUMENT_TOKEN_TO_BE_REPLACED 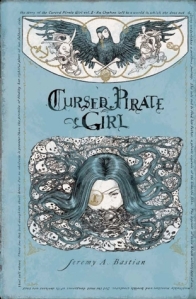 Way back in June, I attended the Denver Comic Convention.  In the process of browsing the expansive artist alleys, I came across a curious man with a nose ring doodling some incredibly intricate, scrimshaw-esque pictures.  Next to him were copies of his book, Cursed Pirate Girl, bound in a distinctive light blue cover and filled with more of the same detailed black-and-white drawings.  It was easily the most interesting thing I’d seen at the Con so far.  I impulsively grabbed a copy.  Two hours later, covered with the paper flakes of Pirate Girl’s beautiful faux-old ragged pages, I was in love.

Now, to be fair, I love fairy tales.  And Cursed Pirate Girl is a fairy tale for people who love the idea of adventure on the high seas; being spirited away by a noble pirate captain and exploring forgotten ruins in search of treasure.  It’s The Girl Who Circumnavigated Fairyland in a Ship of Her Own Making with more water.  And this is where the review comes off the rails, because I’m horribly biased towards this kind of storytelling, not only because it’s basically just a fairytale wrapped in salt-soaked ropes and topped with a talking parrot, but because it is a well-handled coming of age story that casts the girl as someone capable of anything.  Congratulations Mr. Bastian, you’ve punched all of my buttons.

END_OF_DOCUMENT_TOKEN_TO_BE_REPLACED

Target: Tom Hutchison’s The Legend of Oz: The Wicked West Volumes 1 and 2.  Art by Alisson Borges and Kate Finnegan.  Collecting the original miniseries and Issues #1-5

The Legend of Oz: The Wicked West is a truly stunning graphic novel.  Pitched as a reimagining of the L. Frank Baum masterpiece in a ‘Wild West’ setting, The Wicked West manages the difficult task of remaining true to its roots while exploring new territory.  But what stands out is the strength of the characters.  Both fresh and familiar, these new iterations of the much beloved Dorothy, Scarecrow, Tin Man and Lion are the driving force behind a story that is incredibly dynamic and compelling.

The Wicked West opens with Dorothy, who goes by her last name in this adaptation, making her way towards the Emerald City.  It has been three years since a twister pulled her and her horse, Toto, from their Kansas home and dropped them on the Wicked Witch of the East.  The Munchkins gave Gale the witch’s ruby spurs and gem-encrusted pistols as a reward and she’s been on the yellow-brick road ever since.  But the road has been pulled up by bandits and Gale has been lost for years.  Being lost has kept her off the radar for a while, but when she stumbles into a saloon filled with flying monkeys, the hunt is on again.

END_OF_DOCUMENT_TOKEN_TO_BE_REPLACED

So Brandon Sanderson took a break from his endless list of epic fantasy projects in order to dabble in the ‘Young Adult’ fantasy market.  The result is, in many ways, a well-written subversion of the Harry Potter books.  Of course there’s more to The Rithmatist than that, but it does seem that Sanderson was aiming to distance himself as much as possible from the story of a kid chosen by fate to save the world from evil.  Unfortunately, it’s still the story (and the characters) he ended up writing.

END_OF_DOCUMENT_TOKEN_TO_BE_REPLACED 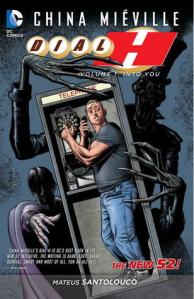 Like many of China Miéville’s novels, Dial H tries to alter the way readers look at its genres.  It uses the tropes of superheroics to tell an entirely different kind of story with a lot of style and unique take on the world of DC Comics.  It is a quintessentially Miéville story, where the rules have to be learned, or re-learned at the very least.  And in spite of all that, it stays true to the comic book canon and is a huge breath of fresh air in a space that has been stagnant for a while.

I am a huge fan of Miéville’s ability to turn the boundaries of genre into creative playgrounds and Dial H doesn’t disappoint in this respect.  It is a brilliantly rendered series that taps into the ‘weird’ space that DC has been attempting to capitalize on in their ‘New 52’ reboot.  It isn’t as grand in scope or story as some of the great graphic novels, like Sandman, but it bridges the gap between a superhero story and a ‘larger’ adventure.

END_OF_DOCUMENT_TOKEN_TO_BE_REPLACED

After reading both Scholar and Princeps, I honestly think I was wrong about Modesitt’s motivations behind abandoning the ‘present-day’ progression of his Imager Portfolio series.  Pinceps is the second book in the Portfolio to follow Quaeryt, an imager that lived hundreds of years before the events of Imager.  In my review of Quaeryt’s first novel, Scholar, I accused Modesitt of fighting off stagnation by radically shifting the setting and the protagonist.  But now I’m beginning to think that he wrote a huge amount of backstory for the island nation of Solidar and was getting frustrated at being unable to use it in Rhennthyl’s storylines.

Princeps continues to flesh out the formation of Solidar, as the restless city-states of the continent are gearing up for full-fledged war.  But the primary focus of these books is increasingly an ongoing treatise on the value of intellectualism, the dangers of populism and an indictment of racial intolerance.