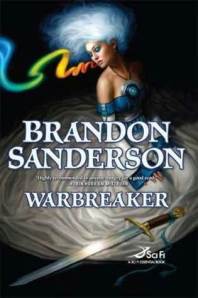 Summary: From the back cover, “T’Telir, the capital of Hallandren, is a colorful city by the sea where gaily dressed crowds bustle though sunny streets and worship heroes who have been reborn as gods.  Ruled by the silent, mysterious God King, the pantheon is nourished by offerings of Breath, the life force that keeps them alive and youthful.

Exiled in Idris, the former royal family reluctantly betrothed a princess to the God King.  Arriving in T’Telir, she finds both the city and the marriage are not at all what she expected.  Her only ally is Lightsong, a god who is skeptical of his own divinity, who fears that war with Idris is inevitable.

Meanwhile, another new arrival in T’Telir, one who bares the sentient sword Nightblood, makes cunning plans based on the unique magic of Hallandren, which uses color to focus the power of Breath – plans that could change the world.

I was incredibly excited to get started on this month’s book sequence; namely, a speedy run through the remainder of Brandon Sanderson’s bibliography.  I can’t really talk about why because of spoilers.  Suffice it to say my re-read of The Way of Kings revealed something that I missed because it was the first Sanderson book I had ever read.  While I may still dislike the man for his abysmal treatment of The Hero of Ages, I have to say that the greater body of his work is quite good, and the more you read of it, the better it gets.

Warbreaker was originally a free web publication that was serialized on Sanderson’s website.  Older draft copies of some of the chapters are still available there, but I ended up reading the finished novel in paperback form.  While it shares a number of traits with Sanderson’s other epic fantasies, Warbreaker feels like a very different kind of novel.  In the same vein of the Mistborn sequence, it plays with the extremes of power, wealth and status and transposes a more modern society into a fantasy setting.  Sanderson’s strong emphases on religions and cohesive magic systems are also present, but the sum of these parts ends up being very different because, at its heart, Warbreaker is a story about averting a crisis, rather than confronting one.