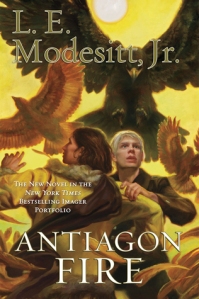 Two things struck me as I was preparing for this review:  First, I somehow managed to skip Imager’s Battalion during my utter failure of a Cannonball Read 5.  I read the book, but I never got a review up.  Second, I think I ran out of useful things to say about the series back at book five.  The things that I liked are still good, and the elements that are weaker don’t seem to be improving.  If anything, the series’ increasing focus on military action reduces the immediacy of Quaeryt’s story and undermines the relationship readers have been building over the course of the last three books.  While the increased presence of Quaeryt’s wife, Vaelora, is a welcome and well executed addition, more and more Quaeryt feels like a background character in his own story.

To fill in some blanks, Imager’s Battalion took Quaeryt from the world of politics into the military, placing him in command of the first squad of Imagers ever used in true military service.  Charged with the invasion of the hostile nation of Bovaria, Quaeryt and the army he accompanies face down an escalating series of challenges while balancing the need to subjugate with the desire to be fair to the citizens they encounter.  Antiagon Fire follows much in the same vein, as a newly promoted Quaeryt is sent as an envoy to the people of Khel in an attempt to prevent further war.  Along the way, he is attacked by forces from the 3rd remaining nation, Antiago, prompting another conflict.

In some ways, Antiagon Fire is extremely predictable.  The large majority of the second half reads identically to Imager’s Battalion; an escalating series of conflicts with military forces.  The only nod to progress is the inclusion of enemy Imagers in the Antiagon forces.  The repetition weights the plot with too much tactical minutia, as depiction of combat increasingly becomes depiction of Quaeryt giving orders and watching them get executed.  Modesitt’s style already favors overly detailed narration which exacerbates the series’ decline into ‘arm-chair general’ style battle reports.  Even when the action gets interesting, Quaeryt has a tendency to knock himself unconscious at the climax of combat, further divorcing the reader from the flow of battle.

Aside from the continued focus on military writing, Antiagon Fire also explores some of the more interesting worldbuilding elements that Modesitt has set up over the series.  These sections are better, particularly a sequence of scenes in the country of Khel, where we start to unravel the layers of prophesy surrounding Quaeryt and Vaelora.  Vaelora’s presence in these scenes is powerful and helps justify the otherwise awkward dynamic between her and her husband.  She really comes into her own as a savvy politician and negotiator, tapping her own brand of magic to carve out a distinct space for herself in what has been almost exclusively Quaeryt’s story.  Unfortunately, she is left behind before the book shifts back to military action, and her refreshing presence is lost from the stagnant final chapters.

Beyond these changes there isn’t much to review.  Modesitt has maintained his borderline neurotic eye for detail, with a significant part of the novel still made up of the daily dining and living habits of the protagonists and their retinue.  As I remarked as far back as Imager’s Intrigue, these day-to-day moments are the calling card of the series as a whole.  While I increasingly tire of their interruption of the flow of the story, it is hard to picture the series without them.  And though it is damnation with faint praise, this minutia is still less repetitive than the combat scenes.  Other elements are just as stagnant, from the now-tired intellectualist and egalitarian rhetoric, to the Mary-Sue like abilities of the protagonist.  Things are very much business-as-usual’ in Solidar.

About the only thing that keeps me going on the Imager Portfolio at this point is inertia.  That and a vain hope that Modesitt will return to Rhennthyl’s arc and its more engaging, superspy/wizard machinations.  The books haven’t quite sunk to the level of paycheck novels, but they are getting closer.  That being said, there is some hope for improvement.  The state of affairs at the end of this book make it very unlikely that the next story will be as military centric.  Combined with Vaelora’s growing role and a promised end to Quaeryt’s arc in Rex Regis, and there may be something to salvage from this series after all.