CBRIII Maneuver #14 – The Curious Case of the Clockwork Man

Target: Mark Hodder’s The Curious Case of the Clockwork Man

Summary: Sir Roger Tichborne: Lost at sea.  But now he’s back to claim his family’s fortune.  Or is he?  To the upper classes, he’s obviously a cunning swindler; to London’s laborers, he’s the people’s hero… while to Sir Richard Francis Burton, he’s the focus of a daring plot to gain possession of the legendary black diamonds known as the Eyes of Naga.  Burton’s investigation takes him to the cursed Tichborne estate… and to an encounter with the ghost of a witch! END_OF_DOCUMENT_TOKEN_TO_BE_REPLACED 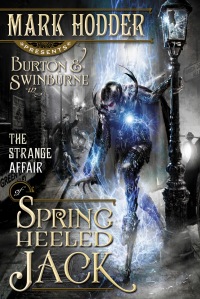 Summary: From the back of the book, “Sir Richard Francis Burton.  An explorer, a linguist, a scholar, and a swordsman.  His reputation tarnished; his career in tatters; his former partner missing and probably dead.  Algernon Charles Swinburne.  A promising young poet, a thrill-seeker, and a follower of the Marquis de Sade.  For him pain is pleasure and brandy is ruin.  They stand at a crossroads in their lives and are caught in the epicenter of an empire torn by conflicting forces: Engineers transform the landscape with bigger, faster, noisier, and dirtier technological wonders; Eugenicists develop specialist animas to provide unpaid labor; Libertines opposed repressive laws and demand a society based on beauty and creativity; while the Rakes push the boundaries of human behavior to the limits with magic, drugs and anarchy.  The two men are sucked into the perilous depths of this moral and ethical vacuum when Lord Palmerston commissions Burton to investigate assaults on young women committed by a weird apparition known as Spring Heeled Jack, and to find out why werewolves are terrorizing London’s East End.  Their investigations lead them to one of the defining events of the age – and the terrifying possibility that the world they inhabit shouldn’t exist at all!