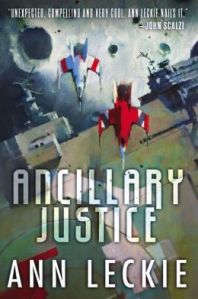 The Imperial Radch series is a relatively simple little space opera, in the classic sense of the term.  Spanning hundreds, if not thousands of years, multiple star systems and a variety of cultural influences, it’s a series firmly rooted in the tropes of its genre.  While Ancillary Justice does wonderful things with those ideas and concepts, building a surprisingly compelling setting and cast, the series as a whole is somewhat underwhelming.  Lacking the bombast of James S. A. Corey’s The Expanse or the vision of Alastair Reynolds’ Revelation Space, Imperial Radch sits in an uncomfortable place between top-tier SF and the middle of the road dross that clogs the shelves at Barnes and Noble.

Ancillary Justice follows Breq, also known as Justice of Toren, One Esk, a surviving fragment of the controlling AI of an interstellar warship.  A portion of Justice examines Breq’s life as the ship Justice of Toren before it was destroyed, while the main narrative picks up after Breq has been on her own for years, executing a long plan that might make up for some of the mistakes she made as Justice of Toren.  The PoV snaps back and forth between the present and the past until we witness the moment of Justice of Toren’s destruction.  After which we shift entirely to Breq on her mission of justice and vengeance.