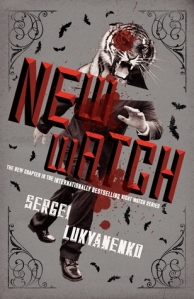 Sergei Lukyanenko ostensibly drew his Watches series to a conclusion with Last Watch, but almost six years later he released a fifth book.  New Watch is a very different kind of novel than its predecessors.  It draws inspiration from other contemporary and urban fantasies, most notably the Harry Potter series.  There is a greater emphasis on the mechanics of the world’s magic system, answering some questions from previous novels, but shifting the tone of the series away from the cerebral contemplation of the battle between good and evil, towards a more action-oriented adventure.  Some of Lukyanenko’s trademark musings remain, but New Watch is clearly written for a slightly different, more global audience than the rest of the pentalogy.

END_OF_DOCUMENT_TOKEN_TO_BE_REPLACED 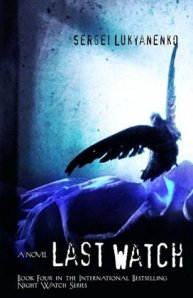 So, I spent a really unreasonable amount of time waiting for and then looking for the Harper paperback release of Last Watch.  I waited so long that the fifth book in the series was published stateside and my copy actually started to gather dust on my shelf.  Eventually I contacted Harper Collins which prompted a very curt autoreply informing me that they didn’t have the publication rights.  Although the Random House imprint they directed me to doesn’t seem to have the U.S. rights either, so…

Last Watch is the conclusion of all the storylines explored by The Watches books so far.  Mysteries are solved, questions are answered, and actions are (somewhat) justified.  The stakes are higher than ever, with friends pitted against each other and alliances formed from the most unlikely combinations.  Through it all, Lukyanenko maintains his cerebral approach to storytelling, blending action, tension and philosophical exploration almost seamlessly and reminding us that ‘good’ and ‘evil’ are rarely the simple constructs we assume them to be.

END_OF_DOCUMENT_TOKEN_TO_BE_REPLACED 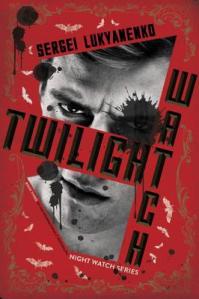 Sergei Lukyanenko’s Watches books have utterly captivated me.  The moody atmosphere and strong characterization drive an uncompromising examination of good and evil.  Oh, and the story isn’t bad either.  Where Day Watch acted as the natural extension of Night Watch, exploring some of the same material from the perspective of Darkness, Twilight Watch almost starts from scratch with a new, overriding storyline that runs through all three sections of the book.  While the vignettes that compose all of the Watches books have never felt truly disconnected, there is a more immediate sense of continuity at work in Twilight Watch that lends urgency to the unfolding events.

Twilight Watch rejoins Night Watchman Anton years after the events in Prague at the end of Day Watch.  He’s settled down with Svetlana and had a daughter, Nadya, who is already starting to show her strong potential as an Other.  Anton is recalled early from one of his rare vacations at the behest of Gesar to investigate a troubling letter.  The anonymous author claims that someone has offered a human the opportunity to become an Other, and not just a low level vampire or werewolf, but a full-fledged magician.  Both the Night and Day Watches believe this to be impossible, but are concerned that someone has revealed the existence of the supernatural to a human.  Anton goes undercover to identify the human in question and attempt to catch the unknown Other in the act, but as always, things are more complicated than they appear. What starts to unfold is a shadowy power play that reaches back all the way to the Russian Revolution.  The stakes are high for both Watches and the Inquisition, as they clash over the awakening of a powerful witch, the terrible secret of magical power and the ultimate fate of the Others.

END_OF_DOCUMENT_TOKEN_TO_BE_REPLACED 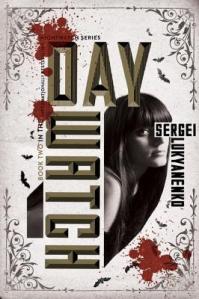 Day Watch is a strong successor to the gritty, twilight world that Sergei Lukyanenko introduced us to in Night Watch.  After exploring the moral dilemmas facing a ‘good’ person trying to maintain a status quo that is anything but good, Lukyanenko shifts his focus to take a look at the bad guys.  That being said, Day Watch isn’t as strong overall as its prequel, partly because the Dark Others aren’t faced with the same quandaries as the Light.  Lukyanenko’s strengths lie in those internal debates and without them the stories have less weight.

Like Night Watch, Day Watch is composed of three separate but interconnected stories.  The first deals with a recurring character from the first book, Alisa Donnikova, a mid-level witch with the Day Watch.  Alisa is sent to a summer camp to recover her powers after a strenuous conflict with the Night Watch.  There, without her powers, she starts to fall in love with a human, putting strain on her identity as a callous Dark Other.  The second story shifts to an unknown Dark Magician named Vitaly Rogoza.  He has no memory of his past, but is rapidly awakening to tremendous dark power and a purpose he doesn’t understand.  The final story takes us back to Anton, the Night Watchman from the first book, and his counterpart in the Day Watch, a wizard named Edgar, as they travel to Prague to face a tribunal of the Inquisition.

END_OF_DOCUMENT_TOKEN_TO_BE_REPLACED 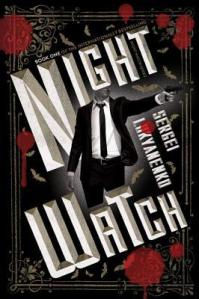 (Read in stereotypical movie preview voiceover) In a world where epic battles between good and evil are a dime a dozen on the Teen Fantasy shelves, one Russian author struggles to bring a sense of subtly and realism to stories about vampires, werewolves and wizards.  (End voiceover)  And that’s to his credit.  Lukyanenko’s vision of a supernatural world where nothing is as it seems sounds trite on paper, but it is actually a well-conceived exploration of the tropes that make up our understanding of good and evil.