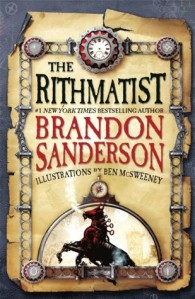 So Brandon Sanderson took a break from his endless list of epic fantasy projects in order to dabble in the ‘Young Adult’ fantasy market.  The result is, in many ways, a well-written subversion of the Harry Potter books.  Of course there’s more to The Rithmatist than that, but it does seem that Sanderson was aiming to distance himself as much as possible from the story of a kid chosen by fate to save the world from evil.  Unfortunately, it’s still the story (and the characters) he ended up writing.