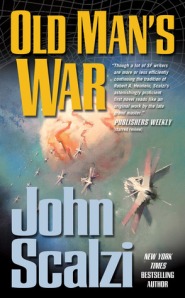 Summary: From the back cover, “John Perry did two things on his 75th birthday. First he visited his wife’s grave. Then he joined the army.

The good news is that humanity finally made it into interstellar space.  The bad news is that planets fit to live on are scarce–and alien races willing to fight us for them are common. So: we fight. To defend Earth, and to stake our own claim to planetary real estate. Far from Earth, the war has been going on for decades: brutal, bloody, unyielding.

Earth itself is a backwater. The bulk of humanity’s resources are in the hands of the Colonial Defense Force. Everybody knows that when you reach retirement age, you can join the CDF. They don’t want young people; they want people who carry the knowledge and skills of decades of living. You’ll be taken off Earth and never allowed to return. You’ll serve two years at the front. And if you survive, you’ll be given a generous homestead stake of your own, on one of our hard-won colony planets.
John Perry is taking that deal. He has only the vaguest idea what to expect. Because the actual fight, light-years from home, is far, far harder than he can imagine–and what he will become is far stranger.”

I’ve resisted reading this book for a very long time.  The reviews were just too universally good, and I’ve been burned that way before.  But after hearing Scalzi interviewed on NPR about his new book, Red Shirts, I finally started wondering what all the fuss was about.  And for once, I wasn’t disappointed.  Old Man’s War is a tremendous novel in an understated package that handles the horrors of war and the wonders of the final frontier with equal aplomb.  It approaches its subject matter with the correct mix of humility, awe and confidence to tie the reader to the plight of the cast, and even this fictional version of the human race.

Old Man’s War is narrated in first person perspective by John Perry, an aging ad copy writer.  He and his wife Kathy decided to get a second lease on life by joining the Colonial Defense Force.  But Kathy died before their number was up, so John is on his own as he enlists and becomes a part of humanity’s first line of defense.  Scalzi’s vision of the future has humanity expanding colonially into the stars, while Earth remains isolated.  But the galaxy is not empty and many other species desire the same resources we need.  Competition for planets and systems is fierce and humanity isn’t the big kid on the block.

END_OF_DOCUMENT_TOKEN_TO_BE_REPLACED

Summary: From goodreads.com, “Captain Ean Tephe is a man of faith, whose allegiance to his lord and to his ship is uncontested. The Bishopry Militant knows this—and so, when it needs a ship and crew to undertake a secret, sacred mission to a hidden land, Tephe is the captain to whom the task is given.

Tephe knows from that the start that his mission will be a test of his skill as a leader of men and as a devout follower of his god. It s what he doesn t know that matters: to what ends his faith and his ship will ultimately be put—and that the tests he will face will come not only from his god and the Bishopry Militant, but from another, more malevolent source entirely…” END_OF_DOCUMENT_TOKEN_TO_BE_REPLACED