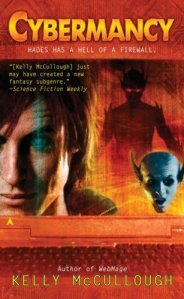 Summary: From the back of the book, “Not just any computer geek and hack into Hades.  But Ravirn (please don’t call him Raven), a direct descendant of one of the three Fates, is no ordinary hacker.  Magic has gone digital in the twenty-first century, and Ravirn is a sorcerer with a laptop – otherwise known as his shape-changing best friend.

These days, Ravirn’s crashing at his girlfriend’s place while she works on her doctorate in computer science.  Only one problem: all of her research is in her webgoblin’s memory, which is now in Hades along with its soul.  To save Cerice’s webgoblin (and her Ph.D.), Ravirn must brave Hell itself. (Truncated)” END_OF_DOCUMENT_TOKEN_TO_BE_REPLACED 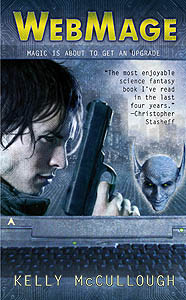 Summary: From the back of the book, “Ravirn is not your average computer geek.  A child of the Fates – literally – he’s a hacker extraordinaire who can zero in on the fatal flaw in any program.  Now that twenty-first century magic has gone digital, that makes him a very talented sorcerer.  But a world of problems is about to be downloaded on Ravirn who’s just trying to pass his college midterms.

Great Aunt Atropos, one of the three Fates, decides that humans having free will is really overrated and plans to rid herself of the annoyance by coding a spell into the Fate Core, the server that rules destiny.  As a hacker, Ravirn is a big believer in free will, and when he not only refuses to debug her spell but actively opposes her, all hell breaks lose.  END_OF_DOCUMENT_TOKEN_TO_BE_REPLACED