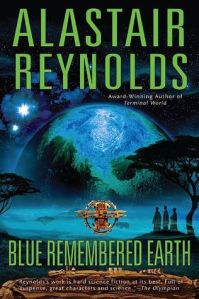 Summary: Adapted from Goodreads.com, “One hundred and fifty years from now, in a world where Africa is the dominant technological and economic power, and where crime, war, disease and poverty have been banished to history, Geoffrey Akinya wants only one thing: to be left in peace, so that he can continue his studies into the elephants of the Amboseli basin. But Geoffrey’s family, the vast Akinya business empire, has other plans. After the death of Eunice, Geoffrey’s grandmother, erstwhile space explorer and entrepreneur, something awkward has come to light on the Moon, and Geoffrey is tasked – well, blackmailed, really – to go up there and make sure the family’s name stays suitably unblemished. But little does Geoffrey realise – or anyone else in the family, for that matter – what he’s about to unravel.

Eunice’s ashes have already have been scattered in sight of Kilimanjaro. But the secrets she died with are about to come back out into the open, and they could change everything.  Or shatter this near-utopia into shards…”

I’ve mentioned this before, but Alastair Reynolds’ novels leave me a little bewildered.  The scope of his settings are daunting and even Blue Remembered Earth, a book that starts and finishes within our own solar system and a scant 150 years in the future, promises to have gotten just as big by the time we get to the end of the Poseidon’s Children series.  Reynolds packs a lot of interesting ideas into this opening novel, but the plot seems to get pushed aside to make room for it all.

Not that Blue Remembered Earth is bad.  It feels like its setting up for something really interesting and, like a lot of setup stories, it doesn’t quite stand on its own.  Reynolds’ attention to detail draws a compelling map to the stars and the future of humanity, but the reason we keep turning pages has nothing to do with Geoffrey Akinya or his sister, Sunday.