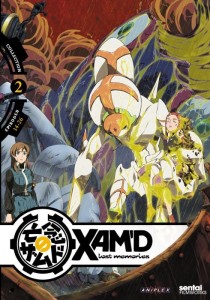 Reasons to Not:
Lots of obscure terminology that is never explained.
Very random ‘final-boss’ ending with little real resolution

Similar to: RahXephon, Eureka Seven, Laputa: Castle in the Sky

Review:
There isn’t a good reason for why I started this new anime review series with Xam’d: Lost Memories.  It isn’t my favorite series, though it probably sits in the top twenty-five.  It is a rather good exemplar of the kind of things I like in shows, anime or otherwise: strong main character development, good storytelling over the entire arc and fun action sequences that don’t dominate the rest of the show.  Xam’d doesn’t feel as polished as some of the real classics in its genre, but still manages to stand above the crowd as a show that provokes thought and emotion.