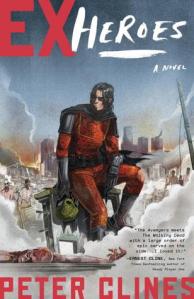 EX-Heroes falls very clearly in my reading category of ‘book candy.’  It’s light, entertaining, but lacking many qualities of actual literary goodness.  Well, actually the concept is executed rather well and Clines manages to tell a pretty compelling story within his somewhat limited framework, so maybe the novel isn’t all that lacking.  But at the end of the day, there’s very little here that hasn’t been explored before.  Points for novelty notwithstanding.

The book bills itself as “The Avengers meets The Walking Dead,” and that’s pretty much the premise.  A sequence of international events prompt the rise of a small number of ‘superheroes,’ who only have a few years to establish themselves before the zombie apocalypse kicks off.  The book is told in two parallel arcs, one following a conclave of heroes who have carved out a sanctuary in the ruins of Paramount Studios in the post-zombie world.  The other arc jumps between perspectives of various heroes as they tell portions of their origin stories or their first contact with the book’s zombies, called ‘Exes.’

To his credit, Clines gets a lot right.  The superhero concepts aren’t exactly fresh, but they do manage to avoid a lot of the more obvious heroes and villains from both Marvel and DC camps.  The origin stories are appropriately low-key, reflecting a world that hasn’t experienced superheroics.  They also manage to avoid a lot of the more traumatic superhero tropes, which leaves space for the events of the book to get more tragic.  The setting is either slightly charming or extremely annoying, depending on how much you enjoy/detest the occasional banter about who killed which celebrity zombie.  I tended to come down of the side of slightly amused.

I also really like the depictions of America’s fall.  Clines does an excellent job of walking through the emergency procedures used by the CDC and the U.S. government as the zombie threat grows, including the use of heroes as frontline units, and the subsequent problems that emerge when those heroes retain their abilities into undeath.  The book’s title is actually a reference to this phenomena, and the marauding Ex-Heroes are one of the more significant threats in the story.

As a cherry on top, Clines did something really smart: he explained the zombies. It’s something that could probably only be accomplished in a setting with some kind of superscience, but defining the zombie threat goes a long way to change the way the reader perceives that threat.  Instead of the amorphous malevolence, there is a more focused malice, as well as a kind of sadness, to Clines’ version of what has become a very well used trope.

Unfortunately, EX-Heroes stumbles a little in its presentation of the post-apocalyptic world and runs afoul of racial stereotypes to create a somewhat unnecessary enemy for the heroes to fight.  The primary antagonists of the first book are actually a rival cluster of survivors organized by the Latino gang, the Seventeens.  While there is some sense to Clines’ choice of a Latino street gang as a group that might survive a zombie outbreak, the Seventeens’ hostility towards other survivors in the LA area, and their somewhat arbitrary supervillain make them come off as stereotypical gangbangers.  The entire concept is tone deaf in a really unpleasant way.  Clines doesn’t help his cause by naming a Korean superhero ‘Banzai,’ although he does do some interesting and progressive things with the female heroes in the book.

On balance, the book is pretty entertaining.  The tone and race issues are major problems, but the action is well written and this apocalypse isn’t boring.  There is a lot of situationally derivative material, but Clines does a good job of mashing-up the genres into something clever, if somewhat unpalatable.  There are a couple more books in the series and I’d be lying if I said I wasn’t a bit interested, particularly if the bad guys are better drawn.  EX-Heroes is far from a must-read, but it’s also not a bad way to burn a couple of hours, particularly if zombies are your thing.