← #CBR5 Maneuver #8 – The Emperor’s Soul
Things I have been doing other than writing reviews: → 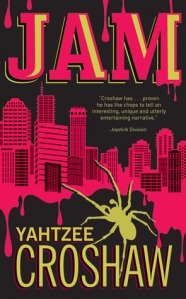 Summary: From the back cover,

“We were prepared for an earthquake.  We had a flood plan in place.  We could even have dealt with zombies.  Probably.

But no one expected the end to be quite so… sticky… or strawberry scented.”

This one falls clearly under the category of book candy.  I enjoyed Ben Croshaw’s first novel, Mogworld, mostly because it parodied a subject close to my heart, MMOs, and did so with a level of clever understanding that a lot of satirists don’t manage. It was no Hitchhiker’s Guide or Guards Guards! but it scratched that itch at the time.  In contrast, I read Jam because I enjoyed Mogworld and was disappointed because I definitely wasn’t the target audience.

Jam is an offhanded response to the glut of zombie apocalypses in popular culture today, the premise being that we are really unprepared for the potential variety of apocalypses that are waiting out there.  What would the survivalists of the world do in response to an ocean of carnivorous jam?  Unfortunately, the parody doesn’t quite connect because it never manages to shed the tropes of the genre.  While there are great moments of humor peppered about, the majority of the satire is lost because, on a very basic level, zombies and carnivorous jam are very much the same.

The story takes place in Brisbane and starts the morning of the jam flood which kills most of the city’s population and brings everything grinding to a halt.  Travis, the PoV protagonist watches his roommate die in the first couple of pages, then teams up with: Tim, his other roommate and a bit of a survivalist nut; Don, a cranky programmer with bizarre priorities; and Angela, a wannabe reporter slash former barista.  The four of them inadvertently attract the attention of a pair of Americans who insist on going by X and Y, and together they all start making their way towards the center of the city in hopes of finding survivors or supplies.

The setup is probably the most interesting part of the book, as the protagonists test the properties of the jam and engage in some amusing getting-to-know-you comedy.  The Americans are particularly funny because of their obvious connection to the jam and their slapstick attempts to remain incognito.  Whatever else I may criticize about Croshaw, his character work is solid and provides the platform for strong interpersonal comedy.  Travis in particular is fantastic, combining quirky and passive traits into a very reactionary leading man that highlights the rest of the cast, rather than overshadowing them.

The jam itself proves to be the weak point of the scenario.  Aside from the initial striking visual, the jam doesn’t bring anything new to the post-apocalyptic formula.  It behaves much as a horde of zombies, with the ability to sense living flesh and actively seek it out.  Also similar to zombies, it can be evaded and is fundamentally passive.  The real conflict of the novel is all interpersonal or between the survivalist factions, with the jam simply providing a backdrop for the main action.

I often argue that many of the things we refer to as ‘genres’ are just settings that we use to tell different kinds stories.  The problem with trying to shoehorn these different kinds of stories into the post-apocalyptic setting is that the setting is a big part of the draw.  Fans of the genre expect a certain level of commitment to the setting-as-plot-device.  The protagonists should be in opposition to the forces of the apocalypse, either in an effort to reverse it, or to survive against it.  Jam doesn’t make a choice on that front, content to let Travis be a follower who explores the various approaches to survival more or less by accident.  By itself, this isn’t a bad thing, but Jam also avoids committing to a singular plot direction so Croshaw can more thoroughly parody the genre, which he does very well.  If all you care about is the parody, the structural concerns melt away and the comedy takes center stage.  And it’s good.  I’m particularly fond of the Irony Cult.

Like a lot of niche literature, your enjoyment of Jam is largely going to be based on how much you like the genre.  Or the author.  The book is as much homage as it is parody and there’s plenty to enjoy from a geeky standpoint.  And in the end you have to give Croshaw credit for a truly hilarious apocalypse.

← #CBR5 Maneuver #8 – The Emperor’s Soul
Things I have been doing other than writing reviews: →