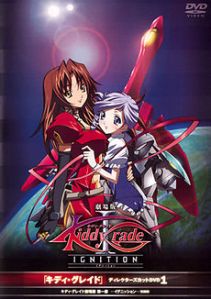 Reasons to Not:
Slow to get to the main story
Female cast is heavily sexualized

Review:
I’m probably going to take some flak for this one.  Kiddy Grade is the frequent target of some heavy criticism, both from inside and outside the anime fanbase.  There’s an unusually high level of fanservice for a show from the first half of the Aughts and the series takes a while to really hit its stride.  In spite of these flaws, the show has a lot of redeeming features for those who can stick with it past the first few, admittedly vapid, early episodes.

Kiddy Grade is set in a far-flung future where humanity has expanded out to colonize the galaxy.  The use of terraforming and genetic manipulation has enabled the human race to occupy a vast variety of planets.  This human diaspora is overseen by twin organizations: the Galactic Union (GU), a political body similar in role to our UN, and the Galactic Organization of Trade and Tariffs (GOTT), an enforcement organization used to police interplanetary economics.  The protagonists, Éclair and Lumière, are special agents of the GOTT.   Gifted with superhuman abilities, they work to ensure that the galactic economy is preserved from greedy governments, criminals and warmongers.

The series starts slowly with a few episodes that profile a day in the life of a GOTT ES Member.  These episodes are largely unimportant to the later plot, but do serve to establish the world of Kiddy Grade and introduce us to the supporting cast.  There’s a lot of Éclair and Lumière showing off their powers, super strength and control of electronics respectively, and a pretty heavy dosage of fanservice. 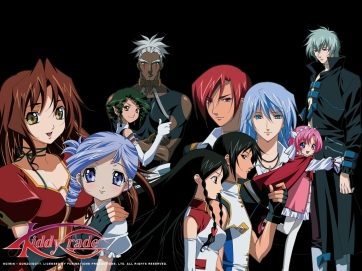 The main story arc doesn’t get started until episode 9 when Éclair and Lumière are tasked with investigating an apparent conspiracy that has already claimed the lives of a number of GOTT agents.  Éclair uncovers a planet-wide brainwashing device put in place by a galactic faction called the Nouvlesse, a kind of noble class who refuse to undergo any genetic modification or technological adaptation to space.  The Nouvlesse consider themselves to be ‘more pure’ than the rest of humanity and they wield a considerable amount of economic power in the galaxy.  Éclair and Lumière manage to destroy the brainwashing machine and reveal the involvement of the Nouvlesse, but the incident also shakes lose some suppressed memories in Éclair’s head.

The story really starts to take shape with the Nouvlesse and their associates becoming the primary antagonists, even as Éclair and Lumière are forced to protect their interests.  Because the GOTT exists to ensure economic stability and the Nouvlesse have controlling interest in much of the galactic economy, GOTT agents are frequently called upon to preserve the status quo, even if that includes slavery and crimes against humanity.  Eventually, these conflicting forces, and their own consciences, put Éclair and Lumière on the wrong side of the law.

Kiddy Grade really shines in this first story arc.  The series moves away from the villain-of-the-week format and embraces a kind of social commentary, contrasting the stability of a society with the welfare of its population.  Even as Éclair and Lumière come down on the side of humanism, their colleagues in the GOTT take up arms to defend the stability of the galaxy.  The characters also get a major boost in maturity and complexity as they grapple with these difficult issues.  Unfortunately, the socio-political aspect of the show is muted in the second story arc that picks up at episode 17, but the strong character development continues all the way the end.

And it’s fun.  Sometimes I forget that entertainment can just be entertaining.  The action and comedy of Kiddy Grade are pretty solid.  There are some truly terrible puns in the English dub, but the majority of the humor is at least chuckle-worthy, though the writers do tend to beat a dead horse.  The action sequences are well done and tend not to be overly repetitive.  There are some major inconsistencies in terms of Éclair’s abilities from episode to episode, but that’s a minor complaint.  The show does a good job of creating action at a number of levels, from the grand space battles expected from science fiction anime, to the visceral fistfights between superpowered agents and cyborgs. 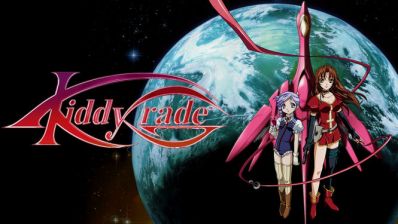 While there are some really spectacular fight sequences, the entire series is a bit hamstrung by Gonzo’s uneven animation.  Gonzo has a reputation for cutting corners, particularly later in series when the budget has been run down.  Kiddy Grade fares better than some of its contemporary shows in that regard, but there are still some significant moments of low quality animation, or obviously reused frames.  The character design is also a bit spotty, with the majority of the female cast sharing facial features, or lack thereof, and only differing in eye color and hairstyle.  Later in the series, a number of characters get visual overhauls and keeping everyone straight becomes a major problem.

But the feature that draws the most criticism is the fanservice.  While Kiddy Grade features an above average level of fanservice, it isn’t so excessive as to be a major barrier to enjoyment for most viewers.  Éclair has a very revealing costume design, and her fighting style produces a large number of panty-shots, but those tropes crop up in a lot of anime, including those with much lower fanservice ratings.  What bothers people is the sexualization of Lumière.  For the majority of the show, Lumière is depicted as a 10-year-old girl, and while she is less heavily sexualized than Éclair, many of the commercial eye-catch cards feature her in sexually provocative poses or costume variants.  While it is clear from the dialogue, and later from plot exposition, that Lumière is much older and more mature than her appearance would indicate, many viewers still have trouble reconciling the image of the little girl with the fanservice aspects of her character.

I’m not going to make value judgments about this particular issue.  As a gay male who has seen a lot of the depths of the world of anime fanservice, I tend to ignore or just miss a lot of the male-targeted fanservice.  In re-watching this series for this review, I tried to pay more attention to instances of fanservice, as it is a non-trivial factor in my assessment of the show, but I still couldn’t find myself bothered by it.  Lumière is repeatedly shown to be a strong, intelligent girl who is more than capable of taking care of herself and is far less sexualized than the majority of the female cast.  I can certainly see how this could be a problem for others, particularly in the cases of the eye-catch artwork that verge on inappropriate.  But those images are such a small part of the series, and play no part in the cannon of the story or the visual narrative.

Ultimately, the viewer must be their own arbiter of taste in these cases of uncomfortable fanservice.  Many critics have determined that Kiddy Grade doesn’t have enough going for it to warrant dealing with the fanservice.  I think there is definitely something worthwhile about the story being told here, but if you get to episode 5 and say, “enough is enough,” I can’t really blame you.  If you do stick it out, one of the real pleasures of watching is letting the show surprise you as it subverts your expectations and delivers some really meaningful substance.