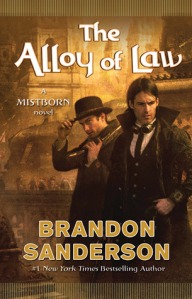 Summary: Taken from goodreads.com, “Three hundred years after the events of the Mistborn trilogy, Scadrial is now on the verge of modernity, with railroads to supplement the canals, electric lighting in the streets and the homes of the wealthy, and the first steel-framed skyscrapers racing for the clouds.

Kelsier, Vin, Elend, Sazed, Spook, and the rest are now part of history—or religion. Yet even as science and technology are reaching new heights, the old magics of Allomancy and Feruchemy continue to play a role in this reborn world. Out in the frontier lands known as the Roughs, they are crucial tools for the brave men and women attempting to establish order and justice.

One such is Waxillium Ladrian, a rare Twinborn, who can Push on metals with his Allomancy and use Feruchemy to become lighter or heavier at will. After twenty years in the Roughs, Wax has been forced by family tragedy to return to the metropolis of Elendel. Now he must reluctantly put away his guns and assume the duties and dignity incumbent upon the head of a noble house. Or so he thinks, until he learns the hard way that the mansions and elegant tree-lined streets of the city can be even more dangerous than the dusty plains of the Roughs.”

Waxillium is a stupid name.  Okay, so you wanted to call your protagonist Wax.  Fine.  There are better ways to get there.  Ways that don’t leave the guy sounding like a posh hair-removal process.  Uh… where was I?

I’m developing problems with Brandon Sanderson.  Yes, I really enjoyed The Way of Kings and the first two Mistborn books, but The Hero of Ages left me with a really bad taste in my mouth.  The biggest problem was that Sanderson had padded out the last book with reused scenes from the first two, and spent more time re-telling the history of the world he had built than he spent moving the story forward.  Now with his fourth Mistborn book, one separated from its predecessors by three hundred years and a canonical world reboot, Sanderson is STILL using the same damn ballroom scenes!

The Alloy of Law introduces us to a new Scadrial, one still flush from the gifts of Harmony, where humans have rapidly advanced in civilization and technology.  As Elendel, the city at the heart of this new Scadrial, becomes more advanced, those who cannot fit in are driven to the Roughs to scrape out whatever existence they can manage.  Against this backdrop, Wax Ladrian, a lawman in the spaghetti western sense, returns to Elendel only to find himself in the middle of a conspiracy of theft and kidnapping.

The rest is terribly predictable.  You can fill in the blanks with details from the Western of your choice.  While both Wax and his somewhat odd sidekick Wayne possess magical powers in the form of Allomancy and Feruchemy, their abilities don’t drive the story or change it in any significant way.  If anything, the metal-magic of Scadrial, one of the major reasons to pick up the series in the first place, has been relegated to second class status as a gimmick to enhance the action scenes.  In the original trilogy, Allomantic abilities were the key to unlocking the history of the world and learning the details of the system along with the cast was a critical aspect of the story.  Without that structure, The Alloy of Law starts to feel a bit thin.

(Un)Fortunately, we do have the continuing themes of Noblesse Oblige, classism and public duty to tie these increasingly disparate pieces together.  Sanderson continues to indulge in his metaphor of ballroom as social battlefield, although we are now experiencing it from the perspective of a noble who rejected his wealth and privilege to serve the fringes of society.  We also get the same internal dilemma of the burdens of a ruler, or in this case an industrialist, versus the moral obligation to help the suffering individual.  Unlike Elend, Wax ends up on the side of the individual, in spite of the fact that his neglect of his new familial duties could result in the destitution of thousands of individuals who work for him.  Regardless of which side of the argument he comes down on, it’s still the same argument Elend was having with himself back in The Well of Ascension and The Hero of Ages.

Getting back to my rant, Sanderson has dumped one of the core aspects of his bestselling series, and managed to keep the padding that detracted from said core aspects.  So, the question is; what’s left?  An underwhelming attempt at fusing an existing franchise to a new setting that comes off as thin and somewhat camp.

Now, before the internet jumps down my throat, I should say that Alloy wasn’t originally supposed to be published.  It was a long-form writing exercise that was basically just a break Sanderson took from working on the Wheel of Time and Stormlight Archive.  That it was even considered for publishing is a credit to Sanderson’s formidable ability.  Or perhaps an indicator of the desperation of publishing houses.

While The Alloy of Law doesn’t compare well to other epic fantasies, or even high end steampunk novels, it isn’t actually bad.  The mystery, while predictable, has interesting elements.  And the action sequences, fueled by gunplay and Allomancy, are fun and different enough to be exciting.  What this story was practically begging for was publication as a comic book.  From the campy Western elements, to the goofy names, even the somewhat obvious parallels between the cast and the Batman franchise, its graphic potential is almost painfully obvious.  Cutting down on the exposition, or reformatting it into character thoughts would have stripped the last awkward novel aspects out and left us with a clean, crisp eight to twelve issue run.  And, as a bonus, we could have avoided the stupid epilogue.

I really do hope someone out there already figured this all out and started whatever paperwork you need to do to make books into comics.  If not, then maybe someone reading this can get to Sanderson before he pens the ill-advised sequel.  Or even shop the idea to Dark Horse or IDW.  Either way, The Alloy of Law wasn’t a book that I enjoyed and I can’t really recommend it.