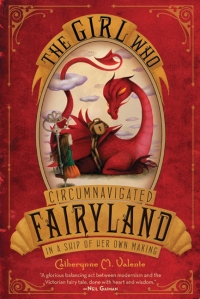 Target: Catherynne M. Valente’s The Girl Who Circumnavigated Fairyland in a Ship of Her Own Making

September is a girl who longs for adventure.  When she is invited to Fairyland by a Green Wind and a Leopard, well, of course she accepts. (Mightn’t you?)  But Fairyland is in turmoil, and it will take one twelve-year-old girl, a book-loving dragon, and a strange and almost human boy named Saturday to vanquish an evil Marquess and restore order.”

The Girl who Circumnavigated Fairyland is, quite simply, delightful.  It is a charming fantasy romp that successfully blends the darkness of traditional Faerie stories with the bright and airy fantasy of a child’s adventure.  Valente successfully recaptures the illusive wonderment of Narnia, strips it of its preachy messages and returns it to the reader, bursting with clever thoughts and language.  The Girl who Circumnavigated Fairyland is a perfect modern successor to the fantasies of Lewis Carol, C.S. Lewis and L. Frank Baum.

The story’s protagonist is September, a young girl from Nebraska who is spirited away to Fairyland.  Unfortunately, Fairyland is currently under the rule of the Marquess, who vanquished the old queen and imposed a series of bureaucratic laws on the normally fun-loving citizens.  Fairyland does continue to operate, but everything is just a little bit off.  September is stopped by a customs gnome at the border, and every creature capable of flight has had their wings bound in iron chains.

The shape of the plot is pretty easy to predict, Valente’s tongue-in-cheek trope mocking notwithstanding.  The fun catch is that the Marquess is extremely genre savvy and already knows that September is destined to alter the balance of power in Fairyland, leaving our heroine somewhat confused as to the right actions to take.  She accrues the traveling companions needed to undertake a fantastic adventure, but is never quite sure if she’s doing the right thing, or just playing into the Marquess’ hands right up until the very end…

Valente is a clever writer with a mastery of language to rival China Miéville.  The tone of the book is similar to Lewis Carol’s Wonderland books, precise but with a careful eye for delightful imagery and clever turns of phrase.  That being said, the prose of the novel does get a bit congested at times.  I gather from other reviews that the audiobook version is almost intolerable because the density of the language requires the ability to take it at your own speed.  It is… possible that younger readers would find themselves lost in words and miss some of the imagery being provided, but I tend to err on the side of “children are as smart as they want to be” and would still recommend this book to kids as young as ten or eleven.

Much like a Pixar movie includes some layered references to make the movies enjoyable to adults, Valente has built in a subtext that reveals itself to students of mythology and aficionados of fantasy.  Perhaps the best aspect of this subtext is the quiet nods to the dark origins of Faerie stories.  Children kidnapped in their sleep by whimsical demigods, returned years later having only aged a night.  Kids replaced with mischievous or devious changelings, never to be seen again.  September’s abduction may have been willing, but under the glitter and wonder of this Fairy world, lies a darker truth that will give a careful reader some quiet chills.  By linking her story to the meta-mythology of the Faerie, Valente has given her children’s story hidden depths that get deeper as you expand your personal knowledge of fairies and literature.

But really, does it surprise anyone that I, of all people, would enjoy a linguistically dense, tongue-in-cheek fantasy novel?  No.  This review is more of an affirmation of my tastes than any sort of useful measurement of quality.  I don’t even think I can understand why some people would dislike these kinds of stories.  So take my recommendation with a grain or two of salt and make up your own mind.  I will continue to sing the praises of The Girl who Circumnavigated Fairyland in a Ship of Her Own Making regardless.