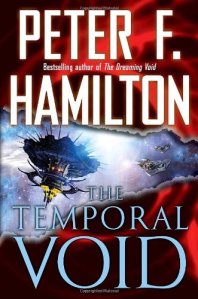 Summary: From the back of the book, “Long ago, the astrophysicist Inigo began dreaming scenes from the life of the remarkable Edeard, who lived within the Void, a self-contained microuniverse at the heart of the galaxy.  Inigo’s inspirational dreams, shared by hundreds of millions throughout the galaxy gave, birth to a religion: Living Dream.  But when the appearance of a Second Dreamer seems to trigger the expansion of the Void – which is devouring everything it its path – the Intersolar Commonwealth is thrown into turmoil.

With time running out, the fate of humanity hinges on a handful of people: Araminta, now awakening to the unwelcome fact that she is the mysterious Second Dreamer; Inigo, whose private dreams hint at a darker truth; and Justine, whose desperate gamble places her within the Void, where the godlike Skylords hold the power to save the universe… or destroy it.”

Trilogies have to deal with a lot of negative associations.  This is mostly due to movie trilogies turning the middle episode into a throwaway setup for whatever the third movie is going to be.  The problem is less pronounced in books, but you have to admit that it’s hard to get excited for the middle book when you know the climax is just around the corner.  Some books and movies subvert this wonderfully.  The Temporal Void is not one of them.

Hamilton exploits an interesting aspect of his Void Trilogy to draw out events to the extreme.  As before, the narrative lines are split between the present-day main universe and its motley crew of protagonists, and the dream memories of world within the Void.  In The Dreaming Void, these sections were split about 50/50, with slight preference given to the ‘real world’ because of the large number of PoV characters.  This time around, the ratio is weighted heavily toward the dream sequences.  It’s sort of a necessity.  The functionality of the Void needed to be explained to justify Justine’s actions and the dreams do a very good job of doing exactly that, in excruciating detail.

The problem being that I wasn’t really invested in Edeard or his situation.  There were too many protagonists as it was, and Edeard’s story reeked of Mythology, probably because it was being told through the dreams of the Living Dream.  Maybe other people got something different out of it, but I felt like I was being set up to dislike the Living Dream from the outset.  And one of the problems I had with the first book was the amount of time that was being spent on the dream sections, when I was rooting for the factions that were trying to contain the Void.  So when book two ended up being mostly dream sequence, it felt like I’d been backing the wrong horse the whole time.

The main plot is also bogged down by the longer dreams.  The narrative was already split heavily between a large number of protagonists, and with the bulk of the book given over to Edeard’s story it doesn’t feel like anyone else really got to do anything.  Paula Myo and Araminta are the only characters who seem to get significant things accomplished.  Justine has a fair number of pages, but literally does nothing but end up where she started.  The end result is a stage primed for real action but a fundamentally unsatisfying individual novel.

On the other hand, when taken by itself, Edeard’s history makes for a compelling novel.  For now.  The progress of his story feels like a reimagining of the best kind of heroic myths.  Edeard, like Heracles, was born special and was varyingly ostracized and lauded for his gifts.  Right up until the last chapter of book two, Edeard is a likeable protagonist with an idealistic streak that makes him fun to watch.  He’s the underdog in a city that despises him, but his willpower and determination (and Deus ex Machina powers) repeatedly win the day.  It is only thought the negative contextualization provided by the main storyline that this story becomes repellant.

Hamilton’s views become the centerpiece of the unfolding plotline here.  It’s obvious that the Living Dream faith is a stand in for any number of real bureaucratic religious organizations.  And it’s just as obvious that this is a bad thing. Hamilton is setting up a pretty standard “Utopia is bad” scenario with religion as its unwitting advocates.  How that will emerge in book three is a mystery so far, but it has been telegraphed pretty hard.

Middle books are frustrating, and I found/find myself much more inclined to harp on existing problems than I normally am only because I wasn’t able to move forward with the plot. Hamilton’s iteration abuses his dual story mode, and is all the more annoying for it.  But I’m not sure you could tell this particular story any other way.  It isn’t clear to me if the fault is in the concept or the execution.  As a rule, readers shouldn’t hold the sins of a middle book against the rest of the trilogy.  But authors should note that we appreciate our linking novels with a bit more plot, and a bit less faffing about.