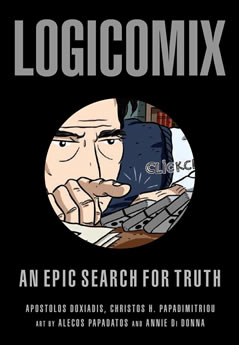 Summary: From the inner cover, “This innovative graphic novel is based on the early life of the brilliant philosopher Bertrand Russell and his impassioned pursuit of truth.  Haunted by family secrets and unable to quell his youthful curiosity, Russell became obsessed with a Promethean goal: to establish the logical foundations of all mathematics.  In his agonized search for absolute truth, Russell crosses paths with legendary thinkers like Gottlob Frege, David Hilbert, and Kurt Gödel, and finds a passionate student in the great Ludwig Wittgenstein.  But the object of his defining quest continues to loom before him.  Through love and hate, peace and war, Russell persists in the dogged mission that threatened to claim both his career and his personal happiness, finally driving him to the brink of insanity.

When I started this Cannonball, I unofficially put a moratorium on comics and graphic novels.  It is so easy to argue that graphic novels are the equal of traditional literature, but I still wanted to establish a sort of baseline for the books I would be reading, and I couldn’t find a good way to fit, for example, twelve volumes of Fables comics in my definition of a ‘book.’  No less than a week out, I stumbled across Logicomix lurking in a corner of the house I’m staying in here.  Like Persepolis, Maus and other graphic novels that straddle the divide between fiction and fact, Logicomix is a dense little novel that happens to be told with pictures.  It’s a solid 350 pages and spins a tale that is one part story, one part lecture and two parts adventure.  Comic or not, it’s a wonderful read and perfectly worthy of inclusion in the Cannonball.

The creative team, lead by Apostolos Doxiadis and Christos H. Papadimitriou, set out from the very beginning to create an engaging story about the development of math and logic.  Their vehicle for this story is the British logician and mathematician Bertrand Russell and his life experience as related to an audience of English World War II protesters.  Russell, a noted opponent of the First World War, is sought out to provide a logical and philosophical basis with which to oppose British involvement in the Second.  Rather then provide a definitive answer, Russell offers up his life story from which the audience is free to draw whatever conclusions they like.

Simultaneously, the camera zooms out of the comic and away from the storyboard to see the graphical representations of the creative team, including artists Alecos Papadatos and Anne Di Donna and the research assistant Anne Bardy.  The story here is a discussion of the more complicated ideas that Russell’s comic-self raises and a vibrant debate on the shape that the comic should ultimately take.  These asides punctuate the densest points of the story and provide some logic-for-dummies explanations for the complex theories and ideas that get tossed around in the second half of the book.

As noted by more than one wary reviewer, the combination of the authors’ points of view and the main story creates a bizarre sense of design by committee.  Segments of the Russell’s life are referenced, but deliberately and explicitly skipped by the somewhat intrusive creative team in the interests of creating a stronger narrative.  But they fracture the narrative every time they break into the story.  The effect of the asides isn’t actually that jarring, but they seem to contradict the goal of the comic as laid out by Doxadis and Papadimitriou in the first few pages.  The book becomes as much the story of making the comic, as it is the story of Russell.

Despite the nonfiction tagging, Logicomix is more fictional than not.  The authors have generated encounters between individuals who couldn’t have met and homogenized the language to a more modern baseline (although, it was pointed out to me that this may be due to the book being translated somewhat poorly from the original Greek.)  The art is simple but really quite fantastic.  Because of the dense nature of the subject matter, the art seems to take a background role behind large text balloons and expositionary boxes.  There are some brilliantly illustrated moments, but the comic is largely just an unusual delivery method for some light philosophy.

Logicomix isn’t everything it sets out to be, but it is a wonderful little story and a great discussion piece.  Assuming you can find anyone else who’s read it.  The central conceit, that logic can only be used to address half of any real world problem, is well worth the short time it will take you to read the book.