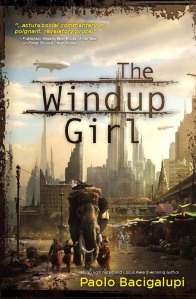 Summary: From the back cover, “Anderson Lake is a company man, AgriGen’s Calorie Man in Thailand.  Undercover as a factory manager, Anderson combs Bangkok’s street markets in search of foodstuffs thought to be extinct, hoping to reap the bounty of history’s lost calories.  There, he encounters Emiko…  Emiko is the Windup Girl, a strange and beautiful creature.  One of the New People, Emiko is not human; she is an engineered being, crèche-grown and programmed to satisfy the decadent whims of a Kyoto businessman, but now abandoned to the streets of Bangkok.  Regarded as soulless beings by some, devils by others, New People are slaves, soldiers, and toys of the rich in a chilling near future in which calorie companies rule the world, the oil age has passed, and the side effects of bio-engineered plagues run rampant across the globe.”

I am the child of a pair of environmental scientists.  I grew up knowing that our current way of life was unsustainable; that we are eventually going to either kill ourselves, or radically change what it means to live.  Even knowing these ‘facts,’ seeing a brilliant author’s crystal clear vision of a post-crisis future is both awe inspiring and terrifying.

Bacigalupi’s The Windup Girl is one of these visions.  It’s important to realize that the future he sees isn’t that fictional.  The world of The Windup Girl has experienced its oil crisis and failed to transition well to renewable energy like solar or wind power.  Instead, power is measured in calories, pumped into advanced ‘kink-springs,’ by the lower classe workers.  But this world is also plagued by a corporate food shortage.  As the global economy moved from fossil fuels and towards kinetic power, the agricultural supergiants saw a chance to make enormous amounts of money.  They released tailored bio-plagues to destroy competing crops, and grew their own strains that were resistant, but also infertile, forcing farmers and governments to pay exorbitant prices just to grow the same thing year after year.

But the bio-plagues mutated beyond control and started killing humans, as well as wiping out almost every non-patented foodstuff in existence.  Now the generippers who built this world have found themselves running out of options.  The genetic pool has shrunk too far to be maintained and in order to survive, they are forced to turn to the last surviving vestiges of nature.  It’s a brilliantly realized dystopia.

The story is composed of a number of parallel narratives, jumping back and forth to reveal the struggling kingdom of Thailand and the forces trying to keep it afloat or tear it apart.  If you ignore the setting, the story could be a simple political revolution brought on by exterior influences, but Bacigalupi does an excellent job of linking to the cultural mentality of Thailand, and creating a potent blend of real science and science fiction that gives the entire book significant depth.  The characters don’t fall into typical protagonist/antagonist patterns either.  I found myself changing who I thought of as the ‘bad guys’ several times.  It is a global kind of story, with many different goals driving the ensemble cast.

The terrifying bit is that Bacigalupi’s vision of the future isn’t too far off.  Bioengineering firms, such as Monsanto, have already taken steps down the path laid out in The Windup Girl.  Terminator genes that sterilize patented seeds are a reality, not a fiction, and years of reliance on pesticides and chemical fertilizer have created generations of crops with radically lower survivability odds.  The problems of alien super-predators, such as goats brought to the Galapagos by early explorers, are already proving the dangers of tampering with the existing biosphere.

I digress.  Bacigalupi’s writing is incredibly good.  He doesn’t excel at any particular literary tactic, but the whole product is polished and well above average.  He has been compared favorably to William Gibson, the father of modern cyber-fiction and that comparison is apt.  The Windup Girl shares the honor of being awarded both the Hugo and Nebula awards with Gibson’s Necromancer.  It is an excellent book and I heartily recommend it.